A story I first wrote about a month ago has finally been picked up by a wider jewish press. Adam Levick of the excellent CIF Watch website berates (along with other websites) the  mass media's differentiated response when a small scale arson and grafiti involving no violence, can be, possibly, ascribed to jews, 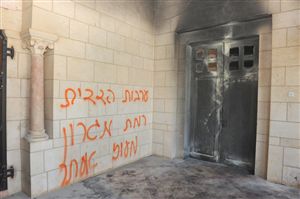 and when a very serious attack on christians happens in Jerusalem. Of course the Latrun arson became a cause celebre in aid of further demonising Israel and 'settlers' whereas this serious attack against christians, for the third time was ignored. I didn't expect anything else to happen, as the mass media likes to reserve its bile for jews.

My interest was rather in why the Catholic authorities in Israel were so eager to repress their own story, as they have done an article by ex Latin 'Patriarch' Michel Sabbah an apologist for suicide bombers. He has been in Gaza pleading with Hamas to go easy on christians, not to forcibly convert them. The article reporting his trip which lauds Hamas and berates Israel was buried in the German language:

I say to all the islamic forces and groups in Gaza: remain true to your islam and take it upon yourselves to protect christians, and not to convert them to islam.

My conclusion, since proved by one Father Aridah is that these prelates are still the same, unreconstructed haters of jews. Israel is for them fair game even if Israel protects Catholics whilst christians are being attacked and slowly ethnically cleansed from Palestinian Authority areas, as happens everywhere else in the arab and muslim world. They care less for their persecuted bretheren than for attacking jews. Of course they hope that if the church shows its hostility to Israel, the Muslim Brotherhood and the PA along with other assorted muslim zealots will go easier on their people. It hasn't happened in history, hasn't happened in the last ten years in Iraq, Gaza and the PA territories and isn't likely to happen in future

As regards the Latrun 'price tag' arson, the CIF article says that:


"The desecration, thought to be perpetrated by an Israeli Jew angry over the evacuation of Migron in the West Bank........... "

I think we should be very wary of accepting this incident on face value. With Qana and 'poor' Muhammed Dura who was very much alive after his death, the 'rocketed ' ambulance along with very many other incidents invented for camera in mind, we need to realise that our enemies are constantly concocting provocations which the mass media, often alerted in advance will pick up and run with.

It is to me suspicious that a group of settlers would single out a christian institution for attack. Christians don't really register much on settler radar who see only the daily attacks by muslims upon them, through stonings of their cars, of attempted and successful stabbings, of infiltration of jewish villages in Judea and Samaria where the murderers never discriminate between young, sick or old. The attackers do however try to avoid the soldiers and the guards whilst going about their bloody work.

The foolish youths who go in for price tag attacks will head for the nearest arab village, not go miles out of their way at night to an obscure Latrun monastery quietly nestled out in the hills where they would be heard by the monks, reported and caught by a police patrol as they returned to the surfaced main road.

There was a previous arson attack in an arab village of Tuba Zangriya which was used to besmirch settlers: The reporting of the Tuba Zangriya attack was lapped up by Reuters amongst others, including the Israeli press, and even Peres condemned settlers for an attack which they didn't commit:

In the burning of the mosque to the ground, hebrew graffitti was used indicating a price tag attack. But all was not as it seemed. Whilst Israeli reporters recounted the arab version of what had happened in the same manner as did the mass media.

The Elder of Ziyon found that one Israeli blogger had investigated the scene and uncovered what really happened. She proved conclusively that the attack had nothing to do with jews, and everything to do with criminality in an arab village.

Firstly the Price tag inscription was written in carbon which meant that the perpetrators had waited around until the wood carbonized, not a clever thing to do if you are jewish and burning down a mosque far off the beaten track and in an arab village! Our israeli sleuth masterfully unveils the deception lapped up by the world's media. Of course here explanation has sunk without trace in the blogosphere.

It took me a while to find the links to the Elder article. The search term that eventually got it was "elder of ziyon mosque burning." There are no other jewish blogs or new sites that after an hour of searching have seen fit to reproduce this material refuting another blood libel against settlers.

The author, Gal Chen, is not a settler or even a rightist. She is against the settlements. But when this "price tag" attack was reported in October, a number of things bothered her - so she started researching it.

The first thing she noticed is that the village has a history of violence, corruption, intra-clan feuds and smuggling. Two years ago the office of the Jewish head of the town council appointed by Israel's Interior Ministry was hit with a hail of bullets.

Chen went to Tuba Zangaria to see it for herself.

It is not an easy village to travel to, especially for any settlers. It is really two villages - Tuba on the bottom of the mountain and Zangaria on top. The only way to get to Zangaria is to go through Tuba.

The village itself is in the Galilee, not very close to Judea and Samaria.

In Tuba itself, the mosque is easily visible and accessible - but it was untouched. The arsonists apparently spent the extra ten minutes to go up the mountain to find a  much less prominent mosque to burn.

There are houses surrounding the mosque. Chen wondered how outsiders could have made it to this inaccessible mosque in a small village without residents noticing, as well as how no one smelled the smoke or heard the fire before it became so large.

Here is the graffiti that seemed to prove this was a "price tag" attack: 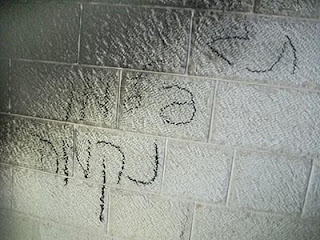 The words say "[Price] tag" "Palmer" "Revenge", referring to the murder of Asher Palmer and his son in September.

But Chen noticed that the words were not written with spray paint, as is usual with this sort of vandalism - but with charred wood from the fire itself. She wonders how the arsonists could have forgotten a can of spray paint.

Not only that, but the diagonal pattern of the graffiti indicates that it was written after the fire had already blackened the wall.

Chen asked the villagers how anyone could have driven to the village without being noticed. They admitted that they are vigilant to see strange vehicles, especially at night, and conjectured that the arsonists walked there from the fields.

Which would mean that they decided to carry gallons of gasoline up a mountain, filled with thorns and stones, to get to an inaccessible mosque, in a crime-ridden Galilee village, surrounded by houses, miles from Judea and Samaria. Residents who live next door did not notice the fire until about half of the mosque was burned and destroyed, and yet the criminals managed to wait there long enough for the fire to cool down so they could write "Price tag/Palmer/Revenge" afterwards.

A few days later, village youths set fire to the local council building - led by a retired IDF general - and he fled, fearing for his life.

Chen ends her post without any accusations, but wondering about how the Israeli media at the scene jumped to conclusions without asking any of these questions.

I'm not by nature paranoid, but Israel's enemies really are out to get it. With so much invention of 'crimes' by jews, we need a healthy skepticism, something Mr Peres amongst many other Israelis, especially journalists seems to be lacking.

So who actually carried out the burning of a monastery door in Latrun? There is every chance that it was the work of either a local arab or even one of the monks themselves. We need to understand the forces arrayed against Israel. They understand that thirst of the media for stories that demonise Israel, and there is very possibly at least one amongst the hebrew proficient Latin community who, possibly without his community's cognizance, is not loathe to help along the anti-Israel cause by way of a burned door and a little scribbling in hebrew.